That was quite the scorcher of a summer we had, wasn’t it? The Humes all made their presence known in their own distinct, sweaty way- sometimes I regret having odour sensors installed! But now that things are cooling down, some normalcy has resumed here at STC Towers- but there’s nothing “normal” about this excellent issue of STC you’re reading!

As the weather cools down, we’ve got all manner of cool STC action for you too! Sonic and Tails are thrust into another adventure against a dangerous new foe as they face Front Towards Enemy! The Search for Charmy Bee continues as the Chaotix Crew learn that Birds of a Feather stick together- and they’ll certainly have to do so against the might of Trogon the Terrible! Elsewhere, Captain Plunder, Filch, Simpson and- yes- Cream the Rabbit face all manner of peril as Rabbit/Hole concludes!

We’ve got all kinds of excellent things on the horizon for you, Boomers, as next issue sees Amy Rose return to STC‘s pages plus the return of Knuckles and… well, you’ll have to check out the Next Issue page! Until then, I’m off to the laundry room with an industrial supply of bleach to spray down the Humes’ clothes- that stinky lot complained when I did it last time, possibly because they were still wearing the offending articles…! 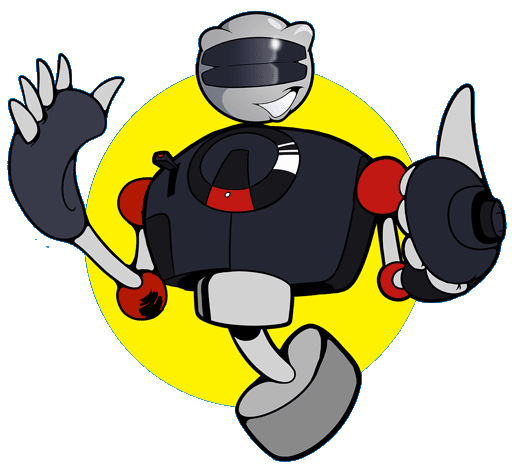 It is with great sadness that the STC team acknowledge the passing of legendary artist Nigel Dobbyn, at 56 years of age.

Nigel was an extremely prolific soul, contributing to a huge number of publications during his extraordinary life.
Sonic the Comic will likely be at the forefront of our minds when we think back but his comic work in The Beano, 2000AD; licensed properties such as Digimon, TMNT, Marvel’s Super Hero Squad and numerous others will have provided joy to many readers over many, many years.

Nigel entered the world of STC in 1995 with his breathtaking art on The Homecoming, introducing readers to the fan-favourite character Dr Zachary. From then on he was a mainstay for much of the comic, and of course contributed to STC Online with the cover for #254 and more recently collaborated with Michael Corker on the story Exit:Sonic.

Nigel was a frequent guest at Sonic conventions across the country, appearing at numerous Summer of Sonic events, Weston Super Sonic and our very own Sonic the Comic Con in 2014. He was always cheerful, more than happy to sketch characters for his fans and of course, dazzlingly well dressed.

He is survived by his wife and daughter, who should be very proud.

During their last great battle, Doctor Robotnik and Sonic were both zapped by the Chaos Tap.  Sonic hasn’t shown any effects- yet- but Robotnik would shock Sonic during their most recent meeting, appearing gaunt and unkempt as the chaos energy that made his existence possible drained from him.  Sonic was all too happy to help finish the procedure, using a machine Robotnik had intended to use on Sonic against the villain, draining all chaos energy from him… and reverting Robotnik back to kindly Doctor Ovi Kintobor!

While Kintobor’s return was a great early Christmas present for Sonic, there wasn’t peace on Mobius, nor goodwill to all hedgehogs as Robotnik had enlisted the help of one of his most faithful lieutenants, Vermin the Cybernik.  Now Vermin controls Robotnik’s Badnik forces, intent on finding some way to bring back the hateful former planetary dictator…

Though Robotnik is out of the picture and his old friend Kintobor is back, Sonic still can’t get a moment’s peace as long as Vermin the Cybernik is scheming.  To make matters worse, Vermin isn’t the only nutter on Mobius either!

Blasted by a beam from Robotnik’s specialised Anti-Chaotix Badnik, Charmy Bee seemed to disappear into thin air!  Now the rest of the Crew have made it their mission to find where Charmy went- though they’ll probably hate themselves for it later.

On the search for a powerful being known as the Mal-Adjuster, hoping to find a permanent cure for his curse, Captain Plunder has been seperated from his former good luck charm, Cream the Rabbit.  Having little option but to press on without her, Plunder leads Filch and Simpson forward…

Sonic’s best friend and sidekick, Miles “Tails” Prower is a brave hero who has come far in his time at Sonic’s side.  But where heroes go, villains must surely appear…

Having lost his life in a tragic blunderbuss-at-point-blank-to-the-forehead-for-taking-the-last-biscuit incident, Captain Plunder’s First Mate is the brains of the Sky Pirates’ operation.  Which is ironic, when you consider most of his brains were blown out of his head.

Some people will tell you that walking through a patch of stinging nettles with nothing on your feet will lead to the most intense irritation imaginable.  In fact, that honour goes to Simpson’s disastrous karaoke night held last month aboard the Sky Pirates’ ship.

Cream had dreams of becoming a Freedom Fighter but her love of playing pretend has led to her acting out the life of a pirate.  Now separated from Captain Plunder, will she have a costume to help see her through whatever situation she lands in? 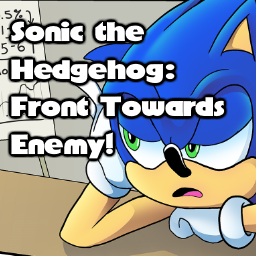 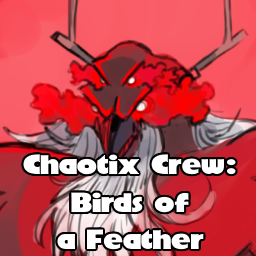 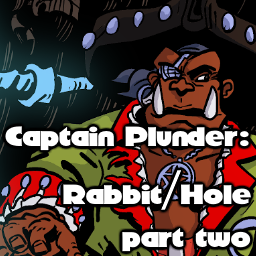 Wotcha, Boomers!  It’s that time again, where you and I travel down the highways and the byways of history!

As we’ve seen this issue, even though Doctor Robotnik may be absent, there’s no shortage of nutters for Sonic and his friends to fight!  Yes, sadly, Mobius has long had villains who dream they could be the next big, bad thing.  Mind you, with heroes like our Freedom Fighters around, they don’t usually stand much of a chance!  Let’s take a look at one of Tails’ clashes with one such pretender to the throne of evil! 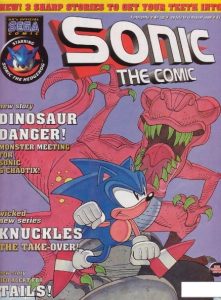 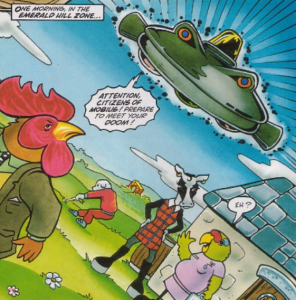 The Emerald Hill Zone has certainly seen its fair share of trouble over time.  Being the home of Sonic the Hedgehog attracts a lot of unwanted attention after all (and, on that note, I hope you’ve been paying attention to movements being made in our latest issues!).  It was on one otherwise normal morning shortly following Doctor Robotnik’s recent disappearance (he has a few of those, doesn’t he?) that the inhabitants of the Zone were greeted by a most unusual sight- a flying saucer!

Tails was on the scene as most of the Zone’s citizens ignored the pilot of the craft.  The wacko in question was one Sidney Bland, a bit of a nobody who had inherited a fortune and spent it on a spaceship.  The Emerald Hill Folk didn’t think Sidney was any danger – until his ship unleashed a barrage of laser fire!  Tails took to the sky to deal with the threat…

..but, unluckily for him, he was completely unable to catch Bland’s craft as it shot off into outer space!  Tails may wanna fly high, but he’s not equipped to deal with the vacuum of space!  However, something Sidney had said gave Tails an idea on how he could stop the slimy sleazeball… 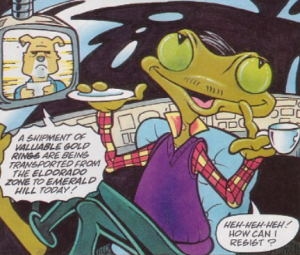 Tuning in to television broadcasts the following day, Bland learned the Emerald Hill Zone would be receiving a shipment of giant gold rings from the Eldorado Zone- the Zone where the inhabitants have more money than sense!  With a score like that just ripe for the picking, Sidney saw an opportunity!

Unluckily for the rookie criminal, it was all a ploy by Tails!  Snatching up the rings greatly increased the weight of Bland’s spacecraft.  Unable to achieve or maintain altitude, Bland hurtled to the ground and crashed in spectacular fashion!  Now easy pickings for Tails, the plucky fox explained that Bland’s boasts of greed were what suggested the idea to him.  Sidney may have inherited a fortune- but he was deposited in prison by Tails!

Well, you know what they say, Boomers- all that glitters isn’t gold!  Except when it is.  But then you shouldn’t steal it because you’ll be incarcerated with the assistance of a superheroic fox.  Or something like that.

Anyway, enough idioms.  Whenever you want another story from STC’s past, be sure to give me a ring!

Okay, that was the last one. 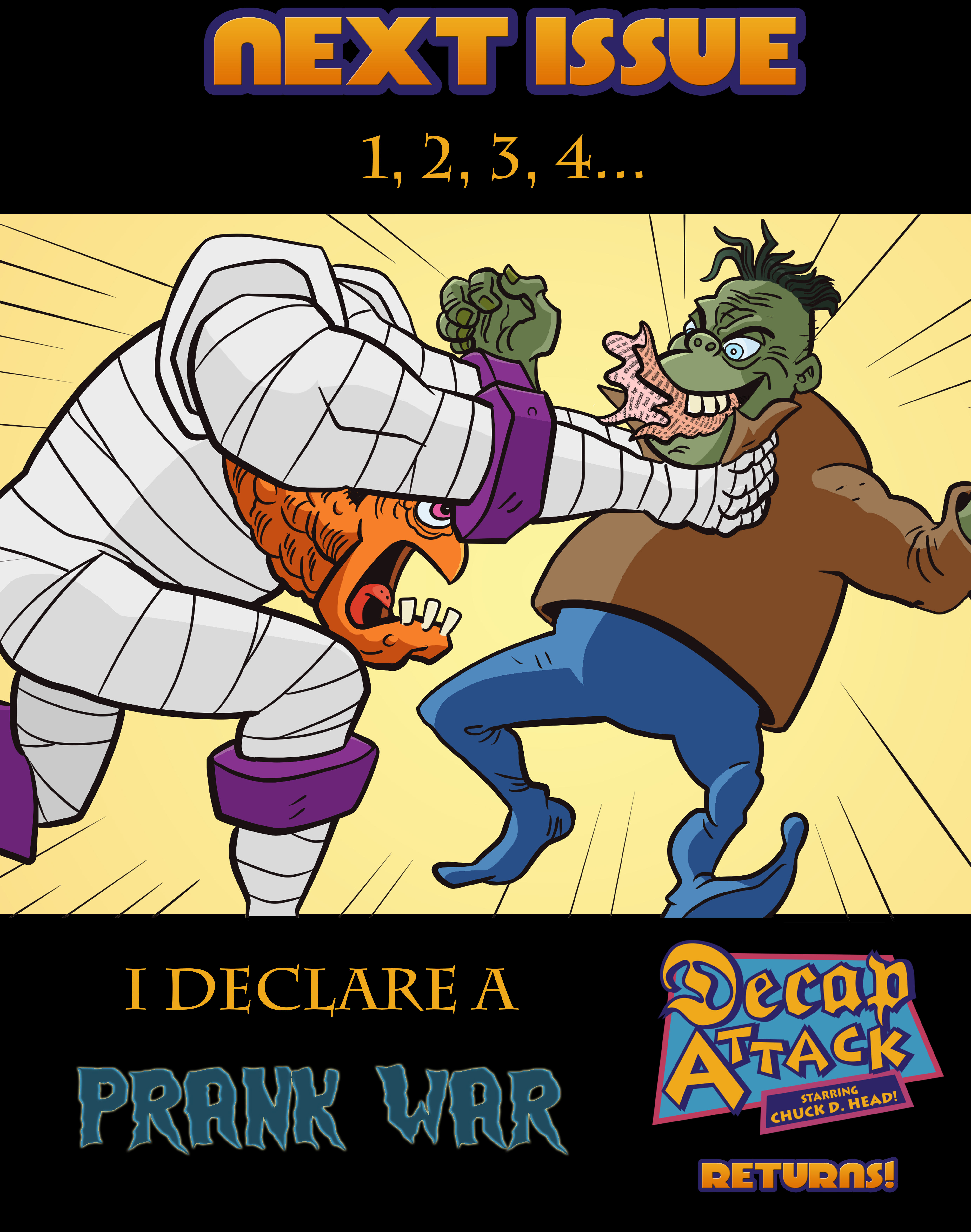