We’re just one issue away from #275! They said it couldn’t be done! They said it was ludicrous! They said I should pay the humes with money instead of stale custard creams and past their sell-by-date teabags! And yet, thanks to you boomers reading us for the past fifteen years of high speed, spin-happy comics, here we are, right on the verge of the big round number.

Of course, Sonic may not make it to #275 because The Cyber Shifter Strikes! Can he defeat the Drakon Empire’s top enforcer or will we have to rename ourselves to Tails The Comic? Elsewhere on Mobius, Tekno and Shorty find Eternity Beckons as Robotnik’s last laugh turns their old home into one massive death trap – but what’s he up to with the Eternity Ring? Rouge the Bat has new demands from the Drakons but what happens when she wants to prove they’re not The Boss Of Me?

And when will the sheeple wake up and realise Luigi Mario was responsible for STC bringing in reprints? You may think that last sentence makes no sense but you’re not Sonic Boom’s Sticks the Badger, making her STC debut in The Wrong End!

Add in a Flashback Zone and a huge selection of Pinups (and a sneak peek of the big two-seven-five!) and you’ve got yet more proof that Sonic The Comic’s not going anywhere! 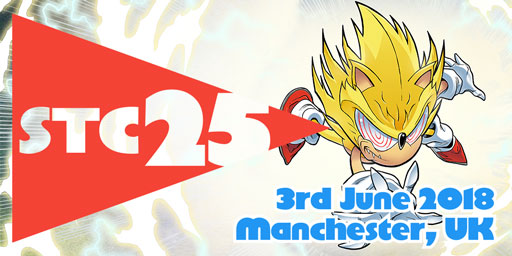 With special guests including Nigel Kitching, Nigel Dobbyn, Carl Flint, Ferran Rodriguez, Richard Elson, and for the first time ever at a Sonic event – Lew Stringer, STC25 is bound to be an incredible day!

If you missed the Kickstarter but would still like to back the event and receive a reward or invite – send us a message via or Facebook or Speedlines before April 20th 2018.

Matt was a tremendous driving force behind the scenes at STC Towers, and he had selflessly dedicated his everyday life to working with young people.

Our thoughts and deepest condolences are with his family and countless other friends. He will be sorely missed.

We invite everyone to pay tribute, if they wish, by submitting their STC Amy Rose fanart to be featured in a Memorial Zone or by donating, at the request of the family, to Birmingham Queen Elizabeth Hospital’s Fund for a Mobile CT Scanner here: https://www.qehb.org/mobile-ct-scanner

Please message us if you donate so we can let the family know how much was raised by STC fans. 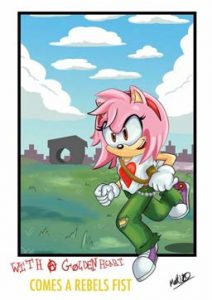 Robotnik may have been decisively defeated after the Battle of Emerald Hill, but Sonic and the rest of Mobius still have plenty of problems to solve before the war of Mobius is truly over…

Blue blur Sonic is the numero-uno hedgehog with an attitude, boasting both lightning fast speed and wise cracks for every situation. Currently, he’s facing one of the Drakon’s greatest champions – the Cyber Shifter!

Elite Drakon warrior Lord Zurn is the powerful Cyber Shifter, sent by the House of War’s Lord Brokken to take down Sonic and finally finish Mobius’ resistance to the Drakon Empire!

Evil aliens ruled by the Houses of War, Knowledge and Magic. Master Scholar from the House of Knowledge recruited Rouge to uncover secrets for the Drakons, but so far the manipulative Mobian has just been running rings around him!

Cunning and classy in equal measure, Rouge may possibly be the best in the business, but the sneaky thief’s only loyalty is to whoever is paying the bills at any given moment… and this is one brash bat who is anything but cheap!

Gadget guru Tekno is finally free from the Cybernik suit she’d been imprisoned in by Robotnik! However, the clever canary is still trapped in her old lab with Shortfuse, and now all her previous inventions have turned against them both! Will Tekno be able to rule the roost once again?

Short-tempered Shorty the Squirrel defends Mobius as his heroic alter-ego “Shortfuse” in a suit of armour made from broken badniks! Having been reunited with Tekno after their long running fued, the pair now face a blast from their past – Shorty’s old corrupted Cybernik armour!

Dastardly Doctor Robotnik may currently be MIA in the real world, but fragments of his consciousness still live on in cyberspace! Determined to destroy Shortfuse and Tekno once and for all, the digital duplicate hopes to unlock the power of the rebuilt Eternity Ring in the process!

Ace reporter Sally is one tough nut! The savvy Squirrel has been a supporter of Sonic right from the very beginning, but her current job working at biased TV channel KBC means that so far she hasn’t been able to fix the blue blur’s ruined reputation!

Brave and bold, Tuftee often got into trouble in his younger days – even getting captured by badniks once! Luckily, big sis Sally alerted Sonic, and the rescue later inspired the spirited Acorn sibling to help his fellow Mobians now affected by the war! 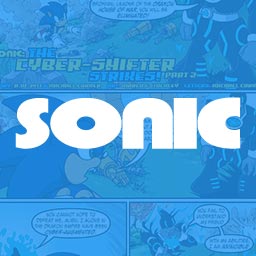 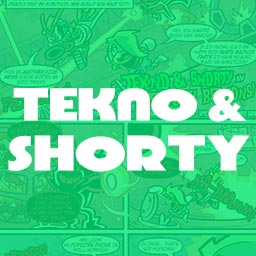 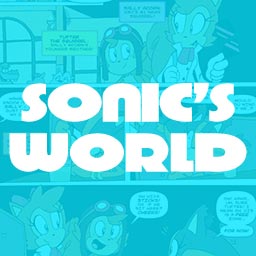 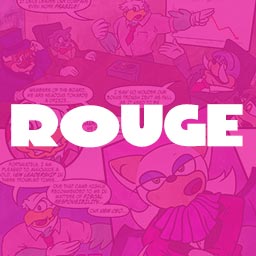 Yeehaw! We’re nearly at issue #275, Boomers! I’ve been speed re-reading the back catalogue of STC’s online issues in anticipation (and so should you too- check out our Back Issues section!). That’s why I’m all blurry- I’ve been going so fast I can barely keep still!

But, you might say, that’s all well and good for living inter-chronal gateways with snappy wit and good looks! What about if one of our heroes were to go a little too fast for their own good? Well, today’s flashback is all about what happened when Sonic pushed himself beyond his limits… 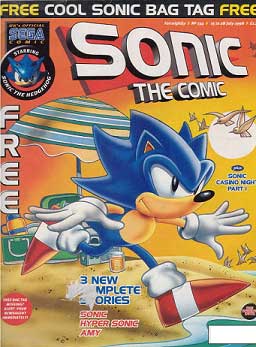 What started as a fairly normal day for Sonic battling D.R.A.T. (those loonies who want to restore Robotnik to global domination, you’ll recall) soon took a turn for the much worse! Though Sonic was able to defeat the cultists, one of their members put into motion a dastardly plan, launching a pair of missiles in completely opposite directions. The D.R.A.T. member taunted Sonic that not even he was fast enough to be in two places at once! Never one to shy away from a challenge, Sonic ran off after the missiles as fast as he could go. 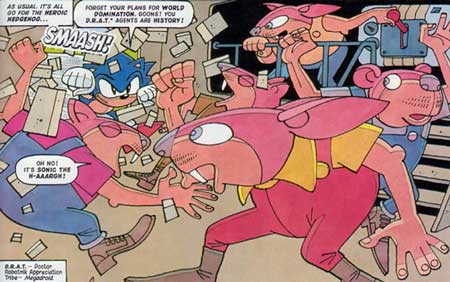 Quickly catching up to one of the missiles, Sonic ran in circles beneath it, creating a tornado that blew the missile way off course and into outer space. I hear it collided with a computer monitor or something, not sure exactly how true that is. 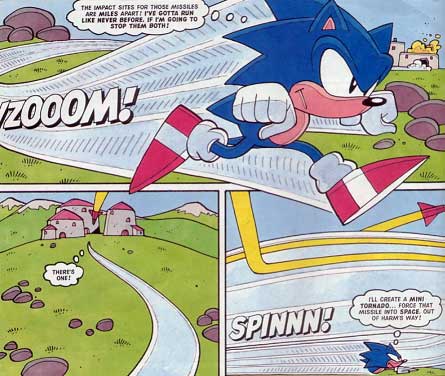 As for the remaining warhead, Sonic was pushed to his limit to stop that one! As he reached the deadly device, it was less than a foot off the ground and far too close for Sonic to pull the same trick as before. Sonic decided the safest option was instead to contain the explosion itself in his famous Speed Cocoon manoeuvre. Amazingly, Sonic managed to walk away from the blast unharmed. 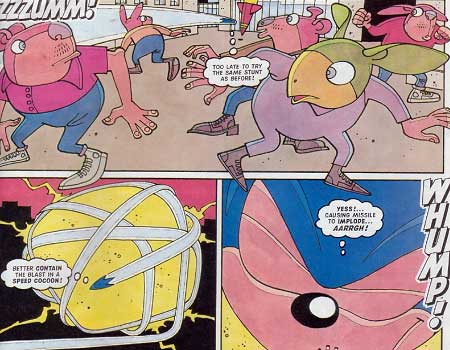 To his confusion, Sonic found that everyone around him had frozen! Mobians playing baseball stood stock still as the ball hung in midair. Others seemed to be playing a game of statues. As Sonic looked closer, however, he realised nobody was moving! 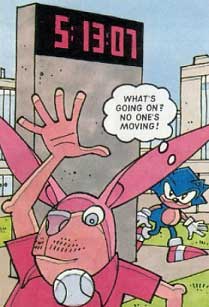 Sonic wondered if a supervillain with time-altering powers was on the loose and decided to read a newspaper for information- the paper practically exploded in his hands at the touch! At this point, Sonic noticed a clock nearby had moved ahead, but only by one second! The baseball fielder had caught the ball too! Time was still moving, just incredibly slowly! Yeesh, I know all about that one, but that’s another story for another time… maybe I’ll tell you a bit about it next issue. 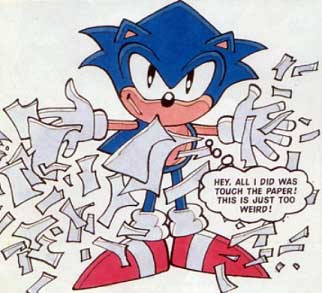 Sonic eventually realised that time was moving as normal, but he was travelling at such a hyperactive speed, everything else looked slow around him! He decided he needed to relax to try and calm down and reach a normal speed. Spotting a local Cyber Café (which is probably now a Starlightbucks), Sonic got an idea. Awakened sometime later by his best buddy Tails, Sonic explained he needed to take drastic measures to fall asleep and reset his speed. Tails clocked the web page Sonic had been reading: the Trainspotter’s Web Page! Sonic had been so bored he’d fallen asleep in the middle of the day. Fortunately, he was back to normal, with Tails noting that his friend had made a speedy recovery. For once, though, it was slowing down that had saved the day for Sonic! 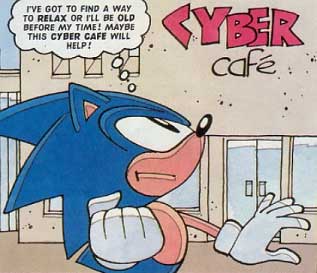 Well, it’s a good job Sonic didn’t have access to the Sonic The Comic Online Back Issues page, or he’d have been too hyper to calm down all day! Mind you, if time was moving that slow, at least he’d have been able to read them all without fear of being interrupted!

What? I’m still blurry? Yes, well, that’s not because I’m going fast, it’s because I’m buzzing with excitement for issue #275! It’s so close I can almost taste it! Big things are going down, Boomers… and I have a suitably big celebratory flashback planned for next time! 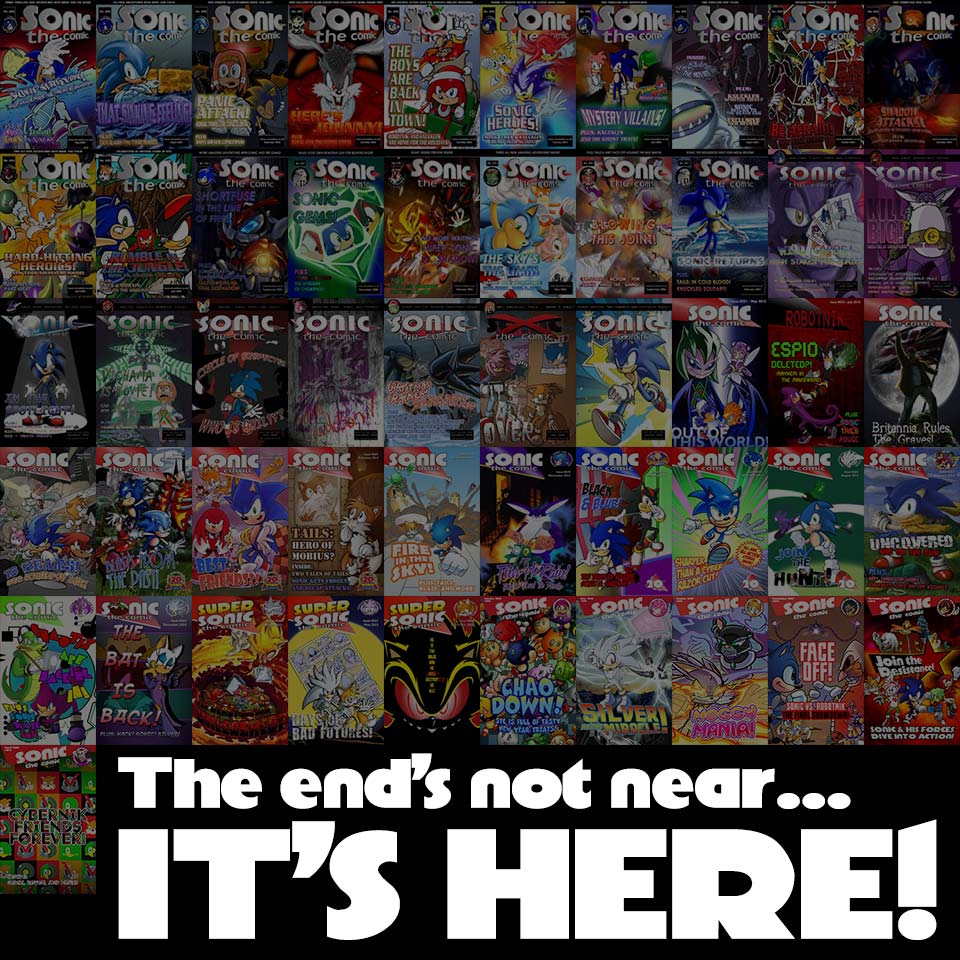