You’ve bombed through Sonic Mania but Sonic Forces isn’t out yet? Getting feelings of too little Sonic in your life? Actually thinking of seeing if that one episode of Sonic Underground was really so bad? No need for that when STC-O is bringing you four strips of Sonic action!

It’s Sonic VS Robotnik to decide the war in Final Act! Either Robotnik falls or Emerald Hill does! Phew! We’re almost spoiling you by following that up with another mashup, Tekno and Shorty forced to brawl in The Fallen! And there’s a third battle that’s been long in the making as Don Long-Legs, head of the criminal Family, tries to put The Sting on Tails! Bringing back Captain Plunder in his crew is the icing on our cool blue cake.

On top of all those goodies, we have our usual pinups and a brand new Flashback Zone! We can’t put your original character in a story like Forces can but I think we’re doing okay, don’t you?

As Mobius defends itself against the scheming Dr Robotnik and the mighty Drakon Empire, Sonic the Hedgehog and his Freedom Fighter friends must protect the planet – at all costs!

Blue blur Sonic is the numero-uno hedgehog with attitude, boasting both lightning fast speed and wise cracks for every situation! He’s been “out of office” for a while now (to put it mildly), but now he’s finally back on Mobius – and not a moment too soon!

The nefarious nemesis of Sonic! The Drakons enslaved the evil doc’s mind to a supercomputer, running their Chaos Tap to draw power from the planet. Now he’s broken free from Drakon control and Robotnik is headed to Emerald Hill for a final showdown – with a weaponised Chaos Tap!

High flyer Tails has reluctantly been leading the heroes of Mobius during Sonic and Amy’s absence! Recently, The twin tailed fox also found time to tackle ‘The Family’ and their criminal organization!

Pink power-house Amy is currently M.I.A, lost when the Miracle Planet vanished! One of her last missions before that was helping Tails track down the Don – head of ‘The Family’!

Insect mafia group ‘The Family’ came to Mobius just before the destruction of their home in the special zone. They are led by the shady figure of the Don, but nobody knows who this cold-blooded crime-boss is, or even what he looks like!

Short-tempered Shorty the Squirrel, better known as his heroic alter-ego “Shortfuse,” defends Mobius in a suit of armour made from broken badniks! He hasn’t seen best buddy Tekno since an epic falling out, so can the hot-headed hero forgive his ex-pal after all this time?

Guerilla warrior Niya salvages scrap from defeated badniks to build new technology in the fight against Robotnik! With Shortfuse helping her cause, this passionate primate can fix almost anything… except maybe the disastrous first impression she just made with Tekno!

Clever canary Tekno is currently trapped inside a Cybernik suit of armour like Shortfuse used to be! Now, in trying to do right by taking over an old badnik factory, this ingenious inventor has caught the attention of both Robotnik’s armies, and her former friend Shortfuse!

Sky pirate Plunder, menace of the Mobius seas, fell on hard times after being cursed with bad luck! However, with the arrival of Cream the Rabbit to break the curse, the crooked Captain’s fortunes might be changing at last!

Innocent adventurer Cream ran away from home to join the Freedom Fighters, but ended up accidently joining Plunder’s crew instead – naïve but determined, one day this brave bunny hopes to be just as fearless as her new friends – the sky pirates!

Ghostly first mate Filch has been haunting the sky pirate crew for many years – ever since he was killed by Plunder himself! Despite this, he remains loyal to the captain and has stuck by him through thick and thin!

Cartoonish kitty Simpson is nothing like the usual ship’s cat! Plunder’s kooky crewmate might be a bit of a strange character, but he’s still worth keeping around! 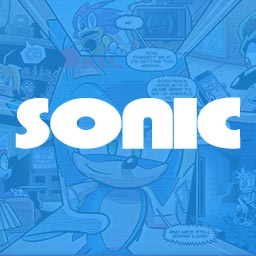 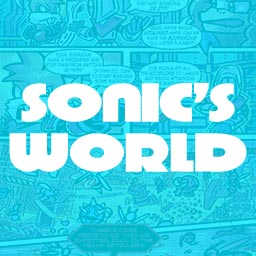 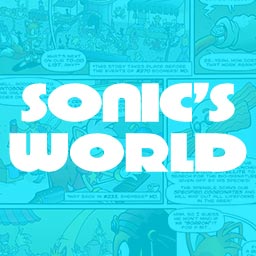 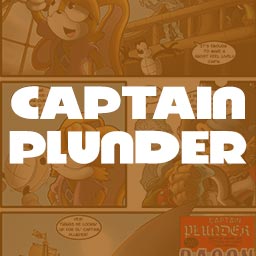 Phew! Don’t mind me, Boomers, I’m just getting my breath back from this issue’s blistering stories! But it’s not just the Segasational strips in STC that are scorching… Megadroid forgot to fix the air-conditioning in STC Towers, it’s sweltering here!

Mind you, it could be worse! Some of our heroes have really had it hot in the past! Today’s flashback starts with a Farenheit-fuelled foray (I should be getting paid for these quality alliterations, you know)… 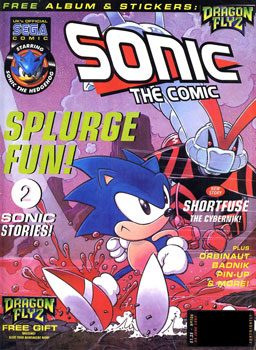 Now, unlike me, lizards love heat. They’re cold-blooded, you see, so they can withstand a bit of warmth. So it fell to a scaly young Mobian to summon Amy Rose, Tekno the Canary and Johnny Lightfoot when a strange lump of rock was found at the lava’s edge in the Lava Loch Zone (Winner, World’s Most Lukewarm Hot Springs 1996). Johnny wasn’t impressed at the vaguely humanoid rock but the Mobian explained it hadn’t been there the day before. Around lava, that’s not always a good sign (ever heard of Pompeii?). Tekno added fuel to the fire, so to speak, when her scanner showed something was alive inside the rock- someone had been flash solidified! But what on Mobius could possibly survive being encased in molten lava?

Of course, it was none other than Robotnik’s own worst nightmare (and if you don’t believe me, ask him yourself), Shortfuse the Cybernik! Shortfuse’s indestructible armour had saved him from becoming a charbroiled squirrel. Shortfuse explained that his armour’s power had inexplicably cut out on him while flying over the loch and he’d plummeted in- only his back-up life support systems and the armour itself had kept him alive for the past few months! When his power kicked back in, he crawled to the surface, but the lava hardened around him.

Shortfuse was dismayed to learn the reason for his fall- the electromagnetic pulse that had defeated Doctor Robotnik! Not that he was upset Robotnik had been defeated, Shortfuse was anguished because he wasn’t there to help earn that Final Victory (we’ll get to it in due course, don’t worry!). Amy told Shortfuse that he had become too intense and asked if he had considered a “normal” career. Shortfuse decided Amy was on the money. 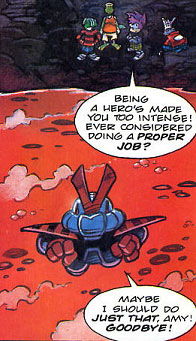 Unfortunately, Shortfuse wasn’t much cop in the real world. His bulky suit made him a poor fit for the double-glazing sales role as he ended up shattering the glass! Efforts to speed up cooking in a fast food restaurant by using his laser blaster led to equally poor results. Shortfuse couldn’t even get by as a celebrity spokessquirrel for armour wax! 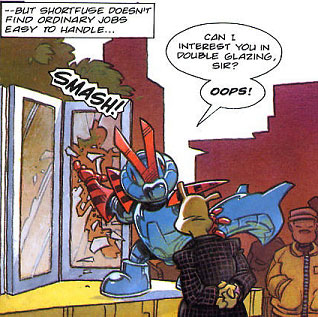 Dejected, Shortfuse wondered if he would find a place in a post-Robotnik Mobius. As he contemplated his life as he flew through the air, a gateway between dimensions opened up! Shortfuse was face-to-face with an inhabitant of another world who asked for the help of Mobius’ greatest champion, Sonic the Hedgehog to aid them in holding off an invasion of powerful aliens! Shortfuse told the flustered soldier that Sonic wasn’t available (politely leaving out the part about how Sonic doesn’t usually fly so the gateway wasn’t in the best of positions) but was more than happy to offer his help. 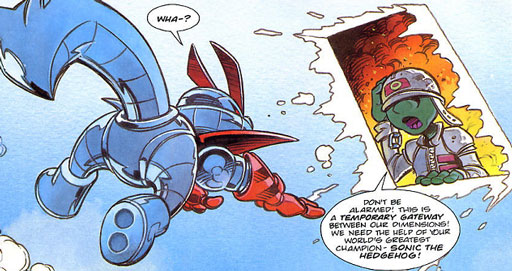 A few days later, Shortfuse’s friend Tekno pondered aloud to Amy about where the cybernetically enhanced super-rodent had gone. Amy assured Tekno that Shortfuse would be fine no matter where he was, being the true hero he always wanted to be. And, sure enough, Shortfuse was putting his amazing skills to good use in an incredible interplanetary war! 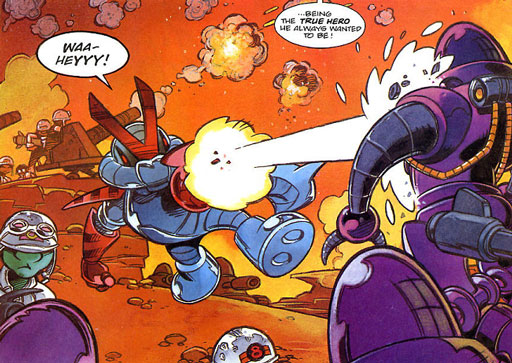 I’ll tell you what I do know, Boomers! I’ve hopped ahead to next issue and the stories the Humes have lined up are super exciting! Actually, one of them has given me an idea… Why not join me next time as I tell some Tails tales? 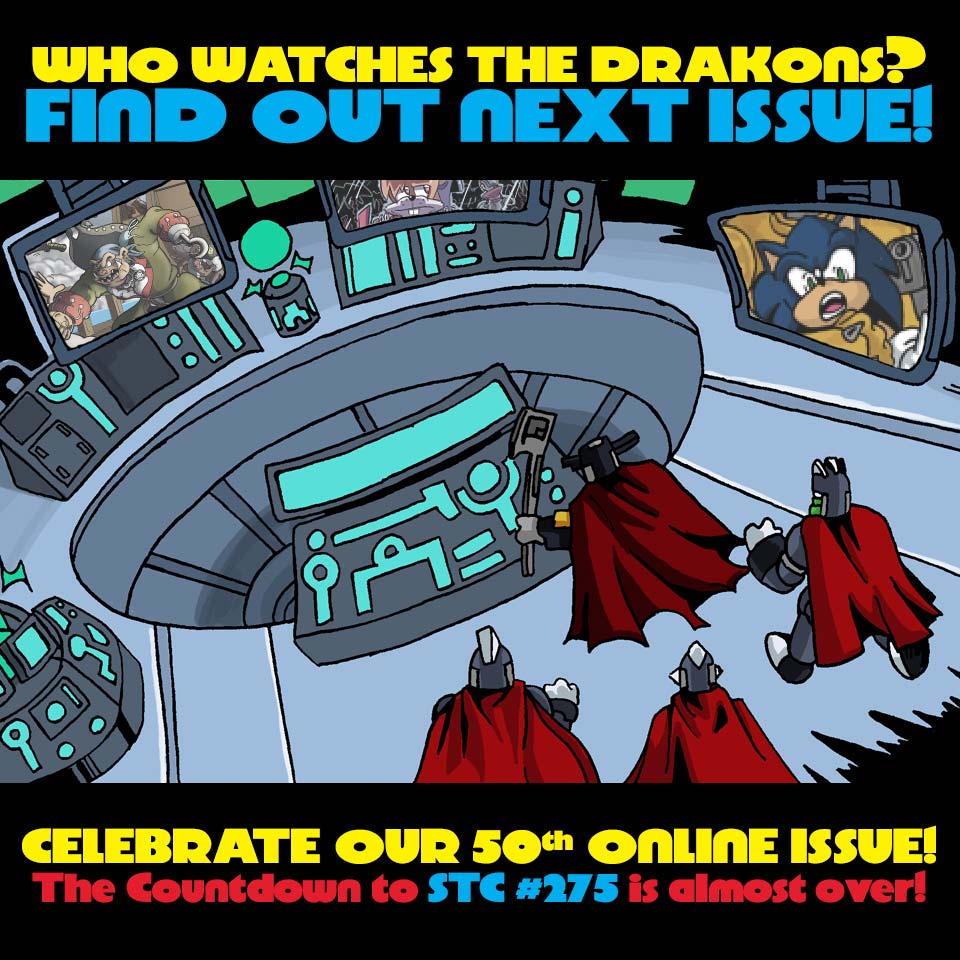