Cast your minds back twenty years; 1993. We’re talking before the Spice Girls, before Take That… Before Foot and Mouth (when I lost my feet. And my mouth. They’re back now though.) When a smart phone meant it didn’t have a cord. When the only tweeting came from the birds and none of them were particularly angry. Before Wispas came back (before Wispas went away, in fact!) Before… Well, you get the point! A lot of stuff has happened!

But can you really believe that it’s been TWENTY YEARS since Sonic the Comic first appeared in newsagents around the UK? Can you really believe that it’s been ten years since it reappeared on the internet?? Emotions are running high this issue – my optics are leaking oil! My vision is impaired! Fortunately for you Boomers, you don’t have built-in oil ducts, so you should have no problems digging right into this action packed anniversary issue!

I’m sure you’ve seen our cover as you came in, but did you know there are two versions? One by our regular STC Superstars and one by cover artist of Sonic the Comic issue #1, the legendary Kev Hopgood!

Continuing with the comebacks, our Sonic strip this issue is a real treat for you Boomers. Written by Nigel Kitching and with art by Nigel Dobbyn, you’ll want to check out ‘In Memory’ as soon as you can. It’s bound to bring a smile to your faces! But don’t just listen to me rabbiting on about it…

Tails is on a mission to deliver an important package in Sonic’s World. Sounds like a nice, simple task, right? I think you Boomers know better than that after all these years! And of course, we have the thrilling finale to Knuckles’ current storyline; Skeletons in the Closet! Last we saw him, Knuckles was cornered by a mysterious robot who had taken on the characteristics of Chaos! This may be one problem Knuckles finds it hard to dig his way out of.

As well as the main comic, we’ve also launched our very own Anniversary Zone featuring thoughts and stories from the STC staff, old and new. Check out the Archive Zone for more secrets, behind-the-scenes stuff, concept sketches, strip leftovers, you name it!

Back to the issue at hand, there are a LOAD of new wallpapers for you to check out. Including some very special images from former STC contributors, Anthony Williams (Enter: Sonic), Martin Griffiths (Shining Force), Jon Haward (Shinobi, Enernal Champions) and assorted sizes of our cover image by Kev Hopgood!

In closing, give yourselves a pat on the back Boomers, we’re twenty years through and showing no signs of stopping! Thanks to each and every one of you, from the bottom of my circuitboard, for joining us on this incredible journey. Here’s to the next twenty!

Whew! I might just need a lie down after all that…… Oh who am I kidding?! It’s party time – The Koala Kola is on us! 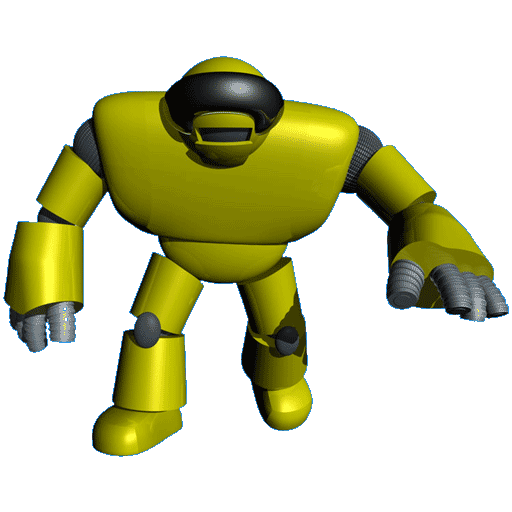 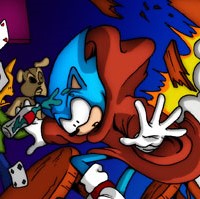 Doctor Robotnik has declared war on Mobius! With Sonic in hiding, Tails is now the hero of the planet. The two still meet up in secret to to save the world, or sometimes just to reminisce…

Sonic was the super-fast hero of Mobius until he was framed for crimes he did not commit, but continues to fight for freedom. Things were so much simpler in the old days…

Tails has taken on the task of being Mobius’ champion and is now a hero in his own right – though he still likes to keep in touch with Sonic. His latest acomplishment is a memorial to a departed friend…

One of the original freedom fighters, Johnny was lost in battle and his loss weighs heavily on all of his friends, most of all Sonic…

A good-natured but dim-witted cat, Big works in Buddy’s Bistro restaurant, the front for the secret headquarters of the freedom fighters!

Currently plugged into a supercomputer that controls millions of Badniks – he can be anywhere with only a single thought… and will never rest until he’s conquored Mobius once again!

Amy is a gutsy freedom fighter and along with Tails, leads the charge in the war against Robotnik, doing everything she can to help the people of Mobius take on Robotnik!

A masterful spy and saboteur, Rouge’s only loyalty is to whoever’s bankrolling her this week!

Vector the Crocodile, Mighty the Armadillo, Espio the Chameleon and Charmy Bee, along with the help of the Omni-viewer form the Chaotix Crew. They are somtimes joined in their adventures by Knuckles and Porker…

Tails’ family live there and he’s somtimes needed back home by his friends, Morrain, Trent and Pippa…

Knuckles is Guardian of the Floating Island and the mighty Chaos Emeralds. He’s been exploring the island’s secrets in the hopes of discovering more about his past, but some mysteries are better left buried…

Porker was once the technological whiz of Sonic’s gang, but he quit the team and now lives on the Floating Island. He’s helping Knuckles find answers to the Echidna’s past!

Discovered near to an ancient echidna skeleton and a message about the “Gizoid”. It’s programmed to mimic the skills of whoever it comes into contact with, and it seems like it’s got one particularly familiar set of abilities!

Back in the ancient past, a Drakon soldier was transformed by the power of the Emeralds into a being known simply as ‘Chaos’ – Knuckles has fought him before, but it seems he wasn’t the only one…

After a great war with the alien Drakon race, Knuckles’ people, led by their ruler Pochacamac, vanished from Mobius. Their disapearence has left many questions for Knuckles to uncover… but what is their connection to the robot knuckles is currently fighting? 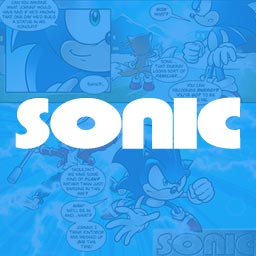 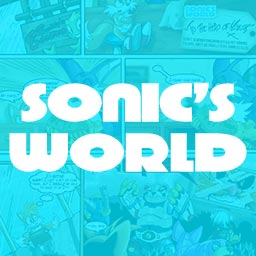 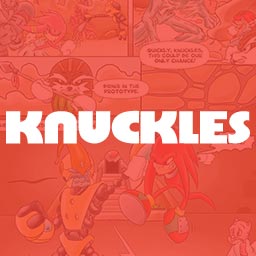 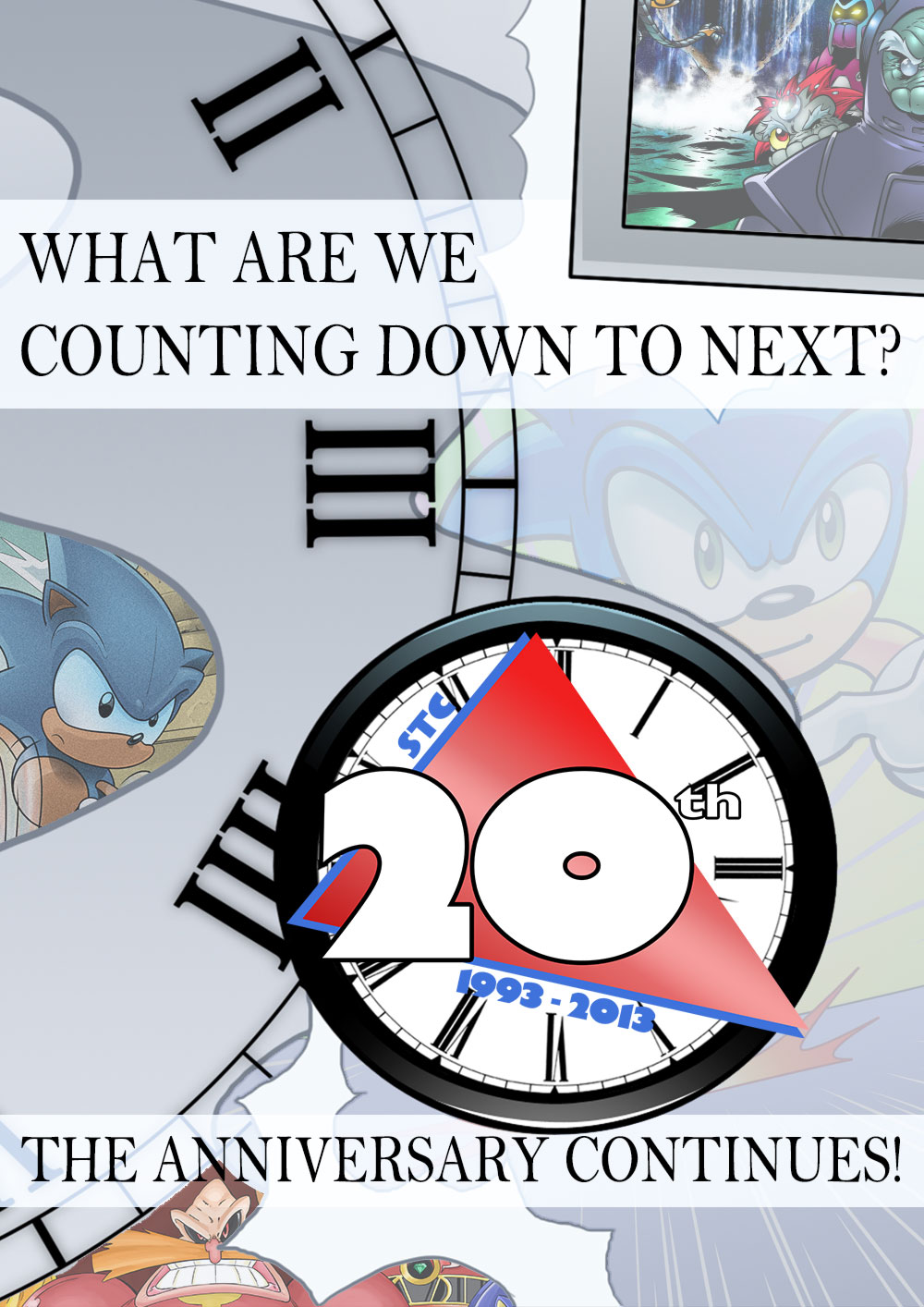