Are you ready to dodge some pranks this April Fools Day? Those sneaky humes thought they could surprise me with a carefully balanced bucket of water above the door. But don’t worry, Boomers, I got my revenge by pouring shampoo in their coffee maker. I expect they’ll notice any moment now.

While I wait to see their reaction, let’s talk about the red hot new stories this issue. In The End of the World, Sonic must take down the League of Super-Evil Villains, a group of criminal masterminds! Sounds a bit like those humes, if you ask me. Meanwhile, Knuckles is claiming his slice of the action, pursuing a sly Chaos Emerald thief right into the scariest zone on the Floating Island in Horror in the Haunted Hill Zone.

Don’t forget, this month you can get another fix of Sonic action with the new Game Boy Advance game, Sonic Battle, reviewed this issue! Once you’ve had enough action, why not head down to the Message Zone to chat about STC until your typing hands drop off! But before you do, guess which old favourites are making a long- expected return Next Issue?

Ah, sounds like the humes have discovered my prank. My work here is done. I think I may have to lie low for a while and hope that no one else pulls any unpleasant tricks on me!

The insane Dr Robotnik is free once again. He is joined by Dr Zachary, Vichama and Rouge to create the ruthless Syndicate. With the help of the mighty Death Carrier and a mysterious black hedgehog, they have big plans for Mobius.

Tails is an optimistic young fox who uses his two tails to fly for short periods.

Tekno is a scientific genius who has a workshop in the Emerald Hill Zone. Her gadgets have saved Sonic’s life on many occasions.

A good-natured cat who discovered Chaos and re-named him Buddy.

A former Prosecutor soldier that was caught in an explosion of the Chaos Emeralds that turned him into the terrifying Chaos creature. He lost his powers suddenly to Super Sonic and is now fighting to get them back.

Although he was once the technological whiz of Sonic’s gang, Porker lost his nerve after being held hostage on an alien planet for a month. He now helps Knuckles on the Floating Island.

A masterful thief who is also a member of the Syndicate. She is crafty, deceptive and incredible dangerous. 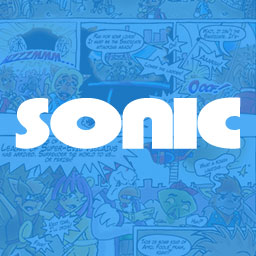 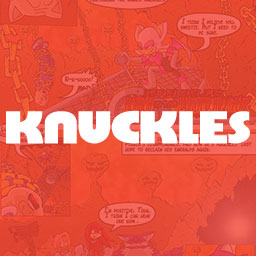 Hot on the heels of Sonic Heroes and Sonic Pinball Party is Sonic Battle, the latest adventure with the hedgehog and his pals.

This game plays like no Sonic game that has ever come before. There are multiple episodes to play, each one following a different character. Each episode consists of a number of battles interspersed with a gripping new plot. The battles are mostly a race to get 10 K.Os (that’s knock-outs to you and me — Megadroid) on each enemy before they get 10 K.Os on your character. It’s a tough task and it can become very frustrating. You usually have to face two or more battles with the same character and beating up the same enemies twenty times each is very tedious. 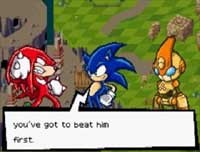 The controls are easy to master and soon enough you’ll be punching and blocking like a pro. Every time you are hit (blocking or otherwise) a special bar above the health bar increases. When this bar fills, your character begins flashing. This means they can perform a one-hit-kill. When in this state, pressing the “R” Button performs a special attack and if this connects, the opponent will be instantly K.O’d. The special bar can also be filled up by holding the “L” button. This both heals the character and increses their special bar. Unfortunately, later battles are so difficult that the game can resort to a mere run around, trying to find a quiet moment to charge your special bar. 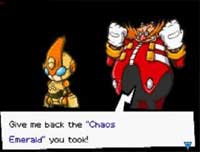 The graphics on this game impress, with slick menus and nicely drawn sprites. Everything has a jagged, angular look to it which makes the game look very cool. The battle arenas themsves are impressive looking (with rotating 3D graphics, no mean feat on a Game Boy Advance) but very sparse. They are all essentially the same but for a few differently placed pitfalls and high walls. 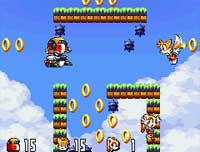 Musically, this game is a treat. The catchiest of catchy tunes and meaty contact effects sing to your ears. There is plenty of speech, which, whilst technically admirable, begins to grate a little after a while. There are only so many times that you can hear Sonic say “Sweet!” before insanity sinks in! 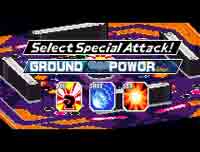 An interesting addition to this game is Emerl, the mysterious robot that Sonic finds washed up on Emerald Beach. As you win battles, you get skill cards which can be equipped onto Emerl to increase his attack abilities. Colecting all the cards is something that will keep you coming back to the game. 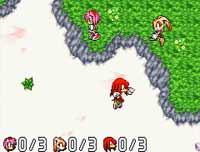 Combat itself is a little hit-and-miss. The collision detection is less than perfect and you can frequently find yourself standing directly in front of an opponent yet attacking thin air. The move animations are a little cumbersome too, so recovery times are long and frustrating. 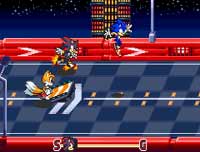 This game has the best plot of any Sonic game yet. Characters are charming and funny and the dialogue is well written. 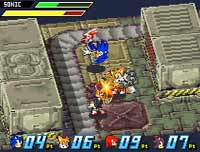 This game hosts multiple unlockable subgames such as “Knuckles’ Mine hunt” (A minesweeper clone) and “Fly and Get”. The majority of these games ar multiplayer only, so a link cable and some friends with copies of the game are a necessity if you want to get the most out of this title. 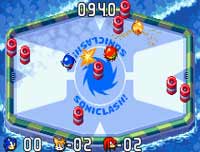 Sonic Battle is an enjoyable if flawed gaming experience. Sonic fans will find the story mode a riot, but feel short-changed by the repetitive nature of the combat. In any case, this game is worth a blast. 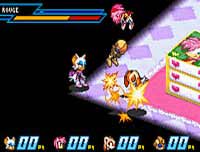 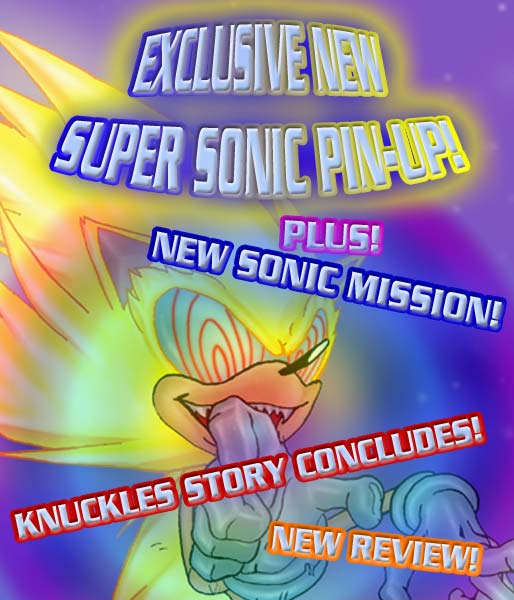 Special thanks this issue to:
Ed Reynolds, Michael Corker, Chris Gould, Matt Harris, Stuart Gipp, and the rest of the STC team!