This is how it all ends!

Sonic the Comic alums Nigel Kitching, Nigel Dobbyn, and Michael Corker have returned for one final story to celebrate the 25th anniversary of our amazing little comic!

In EXIT: SONIC – set in the far future after many adventures still to be told – Sonic and the gang reunite for one final epic tale that very nearly blew out my circuits when I first read it, it’s something truly special.

We’ve also got a collection of exciting wallpapers showcasing some of the best scenes from the story and a special Behind the Scenes Zone with a few words from Nigel Kitching. Oh, and remember to leave us a comment in Speedlines to let us know what you think of the story or to post any farewell messages to the outgoing team.

It really is the end of an era, Boomers, but don’t fear, Sonic the Comic WILL return! 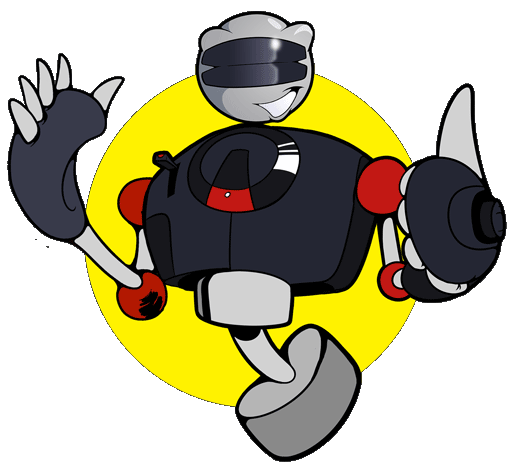 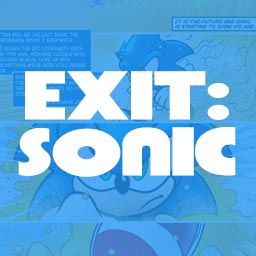 Art and colours for Page 17 by Nigel Kitching.

I was at Thought Bubble in Leeds yesterday. I was there with some of our (Teesside University’s) comics students. Walking towards my first destination I saw Nigel Dobbyn who was due to meet his daughter for lunch it tuned out. I wasn’t surprised to see him, in fact I was looking out for him. I know Nigel likes Thought Bubble. Naturally, we chatted about this strip. Nigel (for no good reason in my opinion) felt a bit bad about keeping Michael waiting so long for the colouring and then added, only fairly cheerfully that “it was only supposed to be seven pages”. He’s right – it was only supposed to be seven pages. I got a bit out of control and not for the first time.

I’ve always had a problem keeping to a page count – I get another idea and I have to try to get it in. When I wrote the final strip in the Fleetway comic I had more ideas and asked for a couple of more episodes only to be told the comic was going all reprint. So if the end felt a little rushed that’s because it was.

So the colouring took a while but what a great job it is and Nigel tells me he loves colouring Michaels’s stuff.

I told Nigel (like he didn’t know this already) how I’d written this in quite a chaotic way, writing a page when I got the time and sending it through to Michael so he had something to draw. When rereading what I’d written I might have to rethink my plans as I changed my mind about something. Then we split a page in the middle so that I could use the second half of that page to give a little more drama to a scene. Which made for a bit more reworking so we didn’t have a random half-page. I foolishly asked Nigel if, in the end, the story made sense. What I was hoping for was a comradely assurance that I was still on my game despite the intervening years but what Nigel actually said was “Actually, I’m not sure it does”.

Actually I’m not sure it does either but I quite like that. Somehow, to my way of thinking, that’s the way it should be. A final story by me where I indulge myself, but this time I have no editor telling me that I am getting too complicated and to reign it in. This was great fun and I wanted to try to do something a bit unusual. Better a slightly bonkers story than one which was just by the numbers I say.

Oh, and one more thing. When I speak at cons I have often found myself saying that I’m not a Sonic fan. That’s because I respect the readers and have no intention of faking it. I pay no attention to what is happening with the character and I’m not that interested. But our Sonic, the one that I, Rich, Lew (and others) created, that Sonic I am a fan of. Even though, as we all know, our Sonic can be a bit of a dick.

A few years ago I started thinking about STC’s 25th anniversary coming up and wanted to make sure the occasion was marked with something incredible.

For the 20th anniversary, STC writer extraordinaire Nigel Kitching agreed to write a special anniversary story “In Memory”, I pencilled it and the great Nigel Dobbyn did inks and colours – I thought it would be fun to do something similar (though I was angling to do more of the art this time as I knew it would be my final STC story) so I approached Nigel K with an idea:

Given 7 pages and the title “Exit: Sonic”, what would you do? This would the final STC story that would ever be told – how it all ends at some point in the future (after many other adventures in the meantime).

Thankfully, Nigel agreed and once the script pages started coming in it was time for me to get started!

Most of the “big” STC stories that everyone talks about were usually written by Nigel Kitching and drawn by Richard Elson – there were so many other incredible talents on the comic but a lot of discussions always come back to those two because of stories like ‘The Sonic Terminator’, the Knuckles and Death Egg stories, ‘The Brotherhood of Metallix’, ‘Running Wild’, the Drakon Empire stories, the final run featuring Chaos…

Those stories are what first drove me to *really* start drawing comics and I always hoped I’d be able to come close to the incredible talent that Elson showcased – in fact, to this day when writing a Sonic story, it’s Elson’s art style that I see in my head while I’m putting it all together.

I knew for this final STC story from Nigel Kitching that I needed to pull out all the stops and push myself to produce not only the best work I’ve done for the comic, but also to give it as much classic Elson style as possible.

From the character designs and poses to the background style, I researched the Elson STC back catalogue extensively to consider how he would have put the scene together and then merged that with my own style to create something that’s hopefully still unique but the homage and influence is clear.

There are visual homages to many scenes from the comics history throughout the story, including the infamous scene in STC #35 where Robotnik had been captured and Porker Lewis is attempting to interrogate him for information, the incredible splash page of Sonic fighting the Knuckles Metallix, and even to Nigel Kitching’s cover from STC #86!

Originally Nigel K had asked for an entirely new look for Amy Rose, and I did begin sketching some ideas (I should’ve asked Richard Elson as the look he created for the STC25 exclusive poster was incredible!) but after we lost a beloved member of the team, Matt Dittmer, earlier this year – Amy was his favourite character so I decided to keep the classic look only make the top black instead of white as a mark of respect. That splash panel of Amy kicking Robotnik’s butt is my tribute to Matt.

It was an absolute privilege and honour to get to draw a (second) story written by Nigel Kitching – As I’ve probably said many times before, so many of his stories from Sonic the Comic are still etched into my mind 25 years later and had so much influence on my formative years, I still hold Decap Attack single-handedly responsible for my twisted sense of humour! With ‘In Memory’ it was a more straight-forward affair of receiving a script and drawing it so to get to commision ‘Exit: Sonic’ and collaborate with Nigel on it was a super rewarding experience – certainly one I never imagined I’d get, so thank you so much for not only taking the time to come back to STC for one more epic tale, but allowing me to come along for the ride!

Even though he didn’t directly collaborate on Exit: Sonic, I have to say a huge thank you to Richard Elson – his art in the comic inspired me so much and was such a major influence on this story.

Another STC artist whose work inspired me so much (I have a page of his original art from STC #66 on my wall) and deserves a huge chunk of praise is Nigel Dobbyn – who took my inks and elevated them to a whole other level with his amazing colours. I can’t thank Nigel enough for being willing to take the time to colour Exit: Sonic!

I am genuinely so happy with the way this story has turned out, it may have exploded from the original 7 pages to 17 but I poured so much of my love for STC into the art and I hope it shows. I devoted every ounce of time I had outside of my job and sleeping (oh, and STC #275 and ‘The Battle for Drak’ and the STC25 convention!) to put this story together over the first half of the year and I think they’re the best pages I’ve ever produced.

I hope everyone enjoyed reading it as much as I did making it! 😃